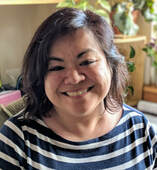 Professor Dianne Pater is a visiting professor at Amherst College, currently on her last semester here. She is a first-generation American and first-generation student who has experienced a non-traditional path in academia. Her family’s migration from the Philippines was difficult and after attending undergrad at Boston University, she dropped out due to personal difficulties and lack of support. After starting a family, she returned to community college and later transferred to the lab technician program at the University of New Mexico. At UNM, she switched to a biology major and fondly remembers conversations with plant physiology professor during office hours. She was invited to form part of his research and in her second year, was accepted into the URM program at UNM, which tracks students into PhD programs. Professor Pater was the only non-traditional student at UC San Diego’s PhD program, but her favorite part was T.A.ing and having conversations with her students. When applying to postdoctoral programs, she had a hard time finding one that would let her teach and do research. She then began to consider teaching at a small college. In her classroom, she focuses on inclusive pedagogy and is passionate about supporting first-generation students because she understands that their labor and struggles are often invisible. She tries to find space for everyone in the classroom, no matter their science background. She hopes to attract non-STEM majors to her classes and believes we are doing students a disservice by not having more classes that are accessible to all students. Professor Pater begins her plant physiology class by asking students to think back to a memory involving plants and has found that students connect their unique experiences to classroom topics and often teach her something new. Next year, she will be teaching at Vassar college on a tenure track position.

Professor Pater is a plant physiologist with an interested in how tomato plants change their physiology & growth in response to the environment they grow in. She works with wild tomatoes called Solanum Pimpinellifolium from the ancestor of our common tomato. Solanum Pimpinellifolium have adapted to their environments and have shown to be able to grow out of rocks on the side of roads without being taken care of, displaying an ability to grow in unusual conditions. She also studies land races that have adapted to the environments in Peru, Hawaii, and Egypt. Professor Pater seeks to investigate what makes these plants salient and resistant. In this way, she hopes to improve the tomatoes we eat using genes from the wild tomatoes as the climate changes. She also researches photosynthesis and how plants regulate how gases are exchanged with the environment.